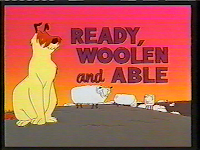 "Ready, Woolen and Able" shows that Sam and Ralph are apparently moving up the corporate ladder, for they now have reserved parking spaces at thier job site. Sam, in his old jalopy, is left in the dust by Ralph in his dragster. Points go to Sam though for using the appropriate hand signal when turning. 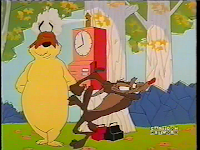 In no hurry to start work, the two casually wait for the whistle to blow. As usual, Ralph's first attempt at thievery is to simply grab a sheep in plain view, and all it takes is an object, in this case a rake, dropped from above by Sam to foil the wolf. 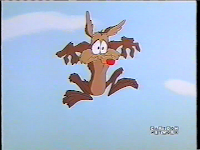 Several gags that follow could easily have been placed in a Road Runner cartoon, such as Ralph's barrel of TNT conveniently bouncing over it's intended target and rather showering a storm of boulders upon the wolf. That tiny umbrella looks very familiar and if I recall, it ain't gonna save you, Ralph. 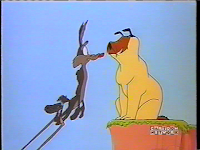 The final sequence takes the idea of Sam being able to apprear everywhere at once to an extreme and Ralph finds that not even a whale's mouth is to be refuge from the ever-watchful canine. 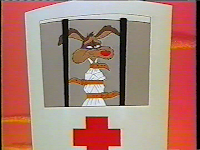 Ralph is finally driven insane, but as he is hauled away to the looney bin (pun intended I guess), he remains confident that he will be back to work tomorrow. Now that is job dedication.
Posted by Coyote at 7:42 PM No comments: 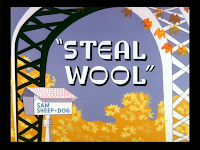 In "Steal Wool", we get a glimpse into the home lives of Sam and Ralph, who are now neighbors. Sam shares his newspaper with Ralph before they head off to work, exchanging the usual pleasantries. At the job site, Ralph forces himself to change his facial expression to one of villainy, driving home the fact once more that this is simply his job. 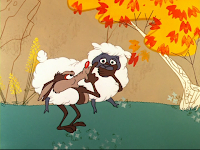 Ralph usually tries the direct approach first...simply grabbing a sheep and trying to walk off with it. Then his schemes get a bit more elaborate. Of course when they don't work, he simply tries to murder Sam. Gotta love it. 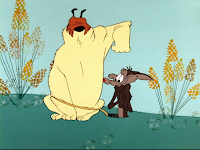 One of my favorite gags of the entire series involves Ralph's giant rubber band. His expressions are just as comical as those of his coyote counterpart in the Road Runner series. 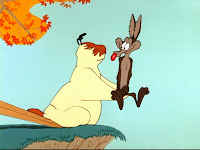 Maximum pain is inflicted on Ralph and, unlike the norm in which cartoon characters are injured but then are perfectly fine in the next scene, Ralph staggers home bandaged in a sling with a black eye. 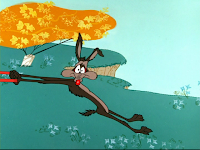 Friends and neighbors once more, Sam shows concern and offers to let Ralph have a day off tomorrow. "I can handle both jobs." Now that I would love to see.
Posted by Coyote at 11:30 PM No comments: 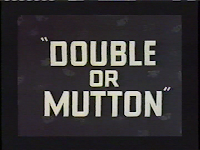 All of the elements of this series begin to fall into place in "Double or Mutton". Firstly, Sam is finally Sam and Ralph is finally Ralph. The two arrive at work, punch in on the timeclock and exchange those monotone greetings that we all know from our own jobs. 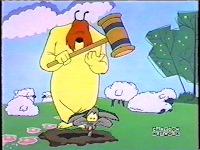 Another day on the job begins and within seconds Ralph has received a sledgehammer blow to the head compliments of Sam. Ralph dips into some heavy artillary such as a cannon and a rocket in attempts to dispose of Sam.
My favorite gag involves Ralph flying a helicopter, trying to nab sheep with a metal claw dangling from a rope. Sam strolls by below and nonchalantly yanks the rope, bringing the copter crashing to the ground. Ralph deploys his parachute just a little too late. 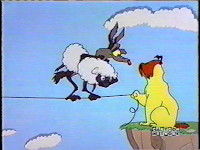 Sam begins to prove that he is a bizarre entity, transcending time and space. After dropping one end of Ralph's highwire, he instantly appears holding the opposite end. 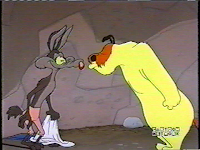 Ralph's Little Bo Peep disguise seems to work until it is revealed that the sheep is actually Sam in disguise, when only moments before both Sam and the sheep that Ralph lures away were in the same space together. 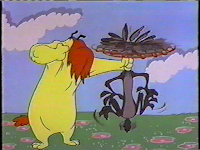 The whistle blows during another thrashing of Ralph, signaling the end of the work day. The two punch out and, now that they are off the clock, resume being civil to one another. "See you tomorrow, Sam."
Posted by Coyote at 5:29 PM No comments: