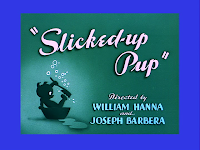 "Slicked-Up Pup" is one of many cartoons that involves Jerry trying to frame Tom in order to get him in trouble. This time the trouble comes in the form of Spike the bulldog. 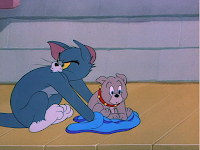 After inadvertantly knocking Spike's newly-bathed son into the mud, Spike warns Tom that if his son does not remain clean, there will be a thrashing administered. 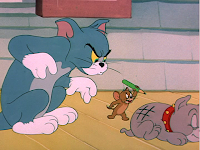 Jerry, of course, does everything he can to get the puppy dirty and make it look as if Tom was the culprit. Tom repeatedly has to clean the puppy from Jerry's constant sabotage. 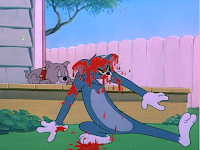 Jerry tricks Tom easily into a game of tic-tac-toe...using the puppy's body as the game board, and forces Tom to take a mud-dipping and a tomato to the face in order to shield the puppy from any potential grime. Tom thrwarts Jerry's ink-dousing attempt, only to accidentally dump the ink on the puppy himself. 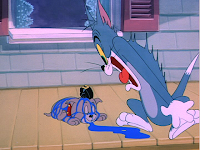 As Tom tries to paint the puppy his natural color, Jerry switches the paint buckets causing the cat to turn Spike's son into a technicolor nightmare. The water hose is switched to dispense tar and Tom is forced to pass the puppy off as a chicken. Spike wises up and saves his son from the washing machine, only to throw the defeated feline into the machine instead.
I will never get tired of Tom's wild "takes", accompanied by his shrieks of terror, that are littered throughout the Tom and Jerry series.
Posted by Coyote at 10:38 PM