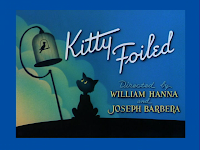 I had another tough choice to make between "Kitty Foiled" and "Old Rockin' Chair Tom". I opted for the former simply because it is what Tom and Jerry are all about. This cartoon has no plot whatsoever but one is not needed. Cat chases mouse and bird. Plenty of cringe-worthy pain is inflicted upon cat. 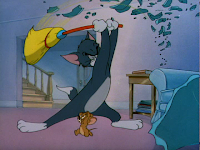 This one is filled with slam/bang action from start to finish. The only brief pauses in the action are when Jerry and the canary don indian disguises to allude Tom and when the canary holds Tom at gunpoint. 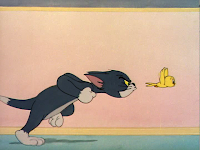 Tom runs fast enough to gain some air, but only briefly, and finds his muzzle in the shape of a mouse hole more than once. A birdcage and floorboards are used as weapons against the cat, and Tom gets all of his teeth knocked out by Jerry weilding a hammer. 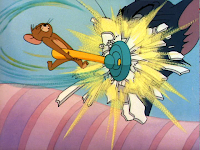 One amusing moment is when the canary has a gun pointed at Tom. The bird drops the gun, and Tom politely (but nervously) picks the weapon up and hands it back to the bird so that the threat can resume. 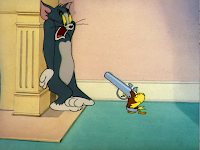 Tom's attempt to run Jerry over with a model train is foiled by the bird, who drops a bowling ball onto the tracks, sending Tom crashing through the floor. Not much more to say here really. Everything you could want in a T&J film. Though I do still really like "Old Rockin' Chair Tom" too. Oh well. The perils of only highlighting one cartoon per year.
Posted by Coyote at 9:59 PM

This is my all-time favorite Tom and Jerry because it does have everything you would want in a cat-chases-mouse cartoon.
My favorite "violent" gags are featured in this one.
I still grit my teeth when Jerry runs up with that hammer. lol

Thanks for sharing this cartoon with us. "Kitty Foiled" was since longtime my favorite Tom and Jerry cartoon ever, even if 1948 was a great year for cartoons.