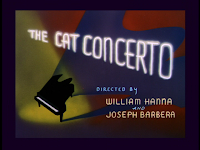 It's a shame that there is some controversy surrounding "Cat Concerto" (You know, that whole "Rhapsody Rabbit" thing) because it can overshadow what is one of my favorite Tom and Jerry cartoons. 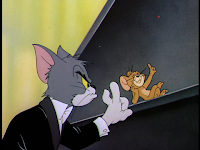 Tom takes to the stage to perform "Hungarian Rhapsody #2". Let me say right now how much this piece of music sticks with me. It has been used in so many cartoons over the years, but never as perfectly as it is used here. 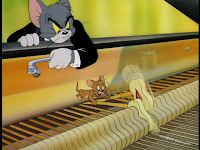 Of course, Jerry is living inside of Tom's piano and his sleep is disturbed. Jerry is not antagonistic at first. He actually tries to enjoy the music until Tom flicks him away. 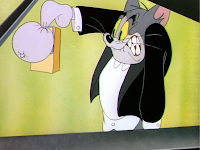 The battle is now on as Jerry tries to ruin Tom's concert. He slams the keyboard cover down on Tom's hands and uses a cleverly placed mousetrap. The mouse raises Tom's bench to ridiculous heights and interrupts the music by playing some jazz riffs on the piano hammers. 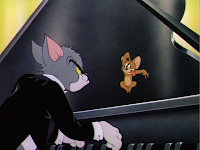 Tom gets his moments as well as he punishes Jerry inside the piano during the song's frantic climax. Finally however, Tom can not keep up with Jerry and wears himself out, allowing the mouse to receive the applause.
Posted by Coyote at 9:40 PM

I still wonder how both MGM and Warners produced similar cartoons at the same time?
Coincidence?
They're both great cartoons anyway...