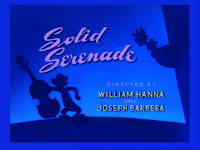 "Solid Serenade" is another Tom and Jerry cartoon that always sticks out in my mind, if for no other reason than Tom's rendition of "Is you is or is you aint my baby". 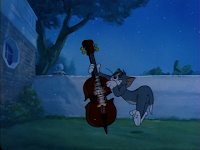 Tom sneaks over the wall with his bass fiddle to serenade his girl, but first he must deal with Killer the bulldog. A bit of taunting and some rope does the trick. 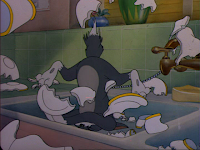 Tom's bass gives off enough vibrations to send Jerry bouncing helplessly around his home and the mouse is quick to break up the concert. What better way than flinging a pie laced with an iron at the cat? I can't think of one. 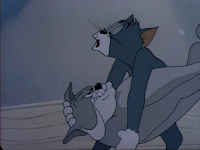 The chase is on as Tom ends up springboarding into a pile of dishes and Jerry slams a window on Tom's neck. 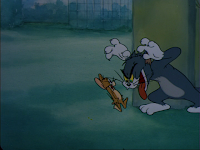 Jerry unties Killer but Tom subdues the dog with some trickery as well as a brick to the head. Tom pauses during the chase to swoon over the female cat, but at one point, Killer inadvertantly becomes the object of Tom's desires. "You set my soul on fire. It is not just a little spark but a flame." 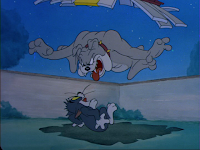 Tom chases Jerry into the doghouse, where Killer awaits. The dog pummels Tom and ties him to the bass fiddle for a musical number of his own.
Posted by Coyote at 6:42 PM