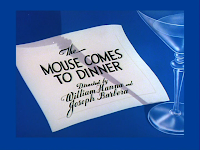 Anytime you see a beautifully arranged dinner table in a Tom and Jerry cartoon, you just know that a food fight isn't far away in the future. 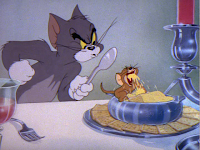 Mammy is expecting dinner guests, but Tom has plans of his own. He invites his girl over for dinner and forces Jerry to be thier personal servant. 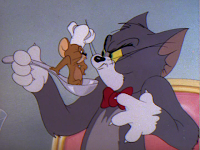 Tom and Jerry go back and forth trying to humiliate each other. Jerry spits hot soup in Tom's face and the cat retaliates by holding Jerry over a candle on a spoon. When Jerry mocks Tom's failed attempts at kissing his girlfriend, Tom retaliates by using the mouse as a living corkscrew. 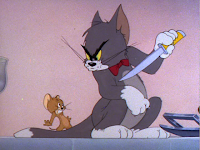 Soon a food fight erupts, with many a pie in the face. Tom even gets a salt-shaker-laced cremepuff down his throat. However, what fun is throwing food when all of those sharp knives are just laying around? Well, Tom and Jerry put the knives to good use, making the battle much more dangerous, and funny. 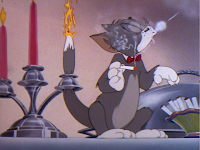 Tom, once again, seems to have no feeling in his tail when Jerry plants it in a sandwich, a dessert and a candle holder, but Tom regains feeling in his tail when he repeatedly bites it and when it is set on fire as he tries to enjoy a smoke.
At last, Tom is completely knocked cold and Jerry sends him sinking in the punchbowl.
Posted by Coyote at 8:04 PM