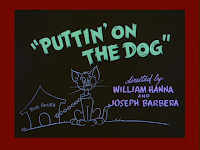 Now don't get me wrong. I love "Mouse Trouble". It's one film that makes me laugh out loud every time. However, "Puttin' On the Dog" does just the same and it's one of my favorite Tom and Jerry cartoons. 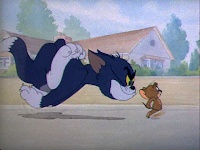 Tom chases Jerry directly into a dog pound. Obviously this is no place for a cat, so Tom swipes the head off of a dog statue and puts it on his own. His feline head now covered, he feels confident about entering the dog pound. 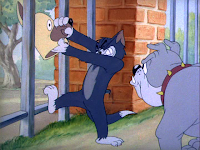 The only problem is that he can't seem to keep the fake dog head on. Right off the bat, he gets it caught in the fence, but luckily the bulldog who spots him is not too bright. 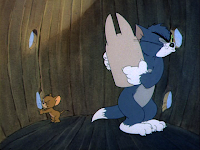 Tom loses the dog head to Jerry and tries to get it back. In the process, he must fake his own decapitation for the benefit of the bulldog. The sight of a headless Tom and the nearby dog head on the ground causes the bulldog to emit a feminine scream of terror. 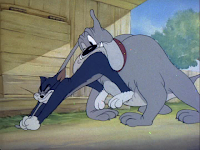 Believing he has caught Jerry with the fake head, Tom grabs onto the bulldog and tries to wrench his head from his body. It's a very funny moment as Tom tugs at the dog's ears and uses his rear end as leverage. 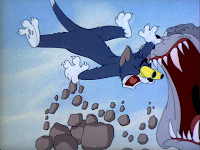 A self-inflicted hit on the head causes a lump on Tom's noggin, which will no longer accomodate the fake head. The gig is up, with some assistance from Jerry. The dog's mouth becomes a steam shovel as he unearths Tom and chases him up a pole.
The cartoon has fast-paced animation and a great jazz score, but I guess that can be said for most Tom and Jerry films. This time it just really stands out to me.
Posted by Coyote at 9:48 PM