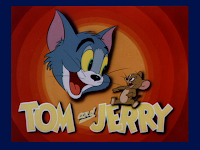 1940 was quite the year for the birth of many of the greatest cartoon characters. Tom and Jerry's films could be seen as just cat and mouse shenanigans, however, they are so much more.

The animation in most of thier films is fluid, fast-paced and energetic. Wild "takes" fly like crazy and new meaning to the word "pain" is expressed. I hate to use the word violence when talking about cartoons, but if it is ever appropriate to do so, now is the time. I can literally feel Tom's pain in some scenes, and to me, that is the result of the believable work done by Hanna/Barbera's staff. These films are breathtaking to watch, and they are good for lots of laughs as well.

A simple cat and mouse chase? Or rather one of the best cartoon series of all time? I vote for the latter, but I'll let you decide for yourself as we journey through the years with Tom and Jerry.
Posted by Coyote at 9:20 PM

Beware if you don't post Mouse Comes to Dinner... ;)