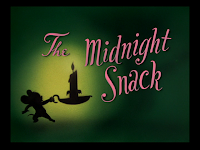 The slow pace of the Tom and Jerry films continued with "The Midnight Snack". Jerry breaks into the refridgerator in the middle of the night, but Tom is wise to him. 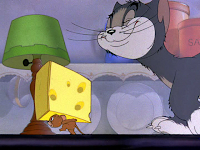 As Jerry makes off with a piece of cheese, Tom constructs an obstacle course before the mouse, complete with a bread staircase and a rolling pin. 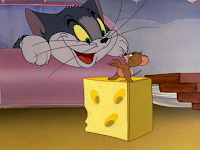 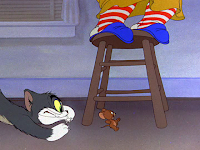 Jerry gets the upper hand by trapping Tom on an ironing board and sending the cat crashing into the fridge. Mammy finds Tom inside, and as Jerry eats his cheese reward, Tom gets an off-screen beating by his owner. 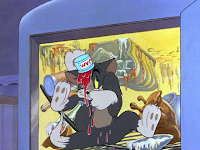 These early films are charming in thier own way, but the best was yet to come, as Tom and Jerry shift things into a higher gear.
Posted by Coyote at 11:24 PM

the very best cartoon, in all time,raul