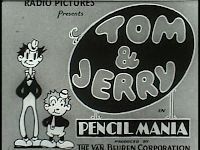 Long before a certain cat and mouse blazed across the screen, two humanoid characters named Tom and Jerry were introduced at the Van Beuren studio.

Cartoons in the 1930s tended to be very surreal, and the films of Tom and Jerry were no exception. The short-lived series only lasted 3 years, so the cartoons have slipped out of public consciousness, especially since the character's names are now completely associated with MGM's cat and mouse.

The Tom and Jerry cartoons are a decent representation of the Van Beuren studio and over the next three days, they will be highlighted here.
Posted by Coyote at 10:17 PM