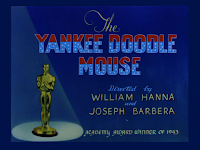 Sorry about not posting regularly lately. I have been rather busy. Anyway, we continue on with Tom and Jerry to 1943. "Yankee Doodle Mouse" is a product of the war years and delivers just that:an all-out war between the cat and mouse. 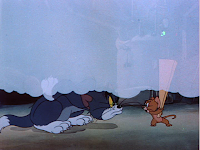 Jerry retreats to his Cat Raid Shelter (the basement) and launches an assault on Tom, who is chasing him. Jerry uses every tool available, from tomato-launching mouse traps, to bottle corks, to spatula-shooting bricks. 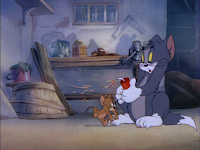 The violence (for lack of a better word) begins to come into its own here as Tom is blown up numerous times by Jerry's dynamite sticks. Tom even brings it upon himself when he falls for the classic "reverse psychology" trick as he and Jerry try to pass some dynamite back and forth. 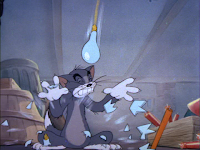 A cloud of flour makes Tom ripe for some floorboard smacks from Jerry, but the mouse's egg carton plane is shot down by the cat with fireworks. 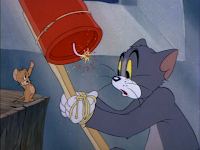 Finally catching Jerry, Tom begins to tie the mouse to a rocket but ends up tied to it himself and is launched to the heavens, giving Jerry a fine 4th of July display.
Posted by Coyote at 8:53 PM