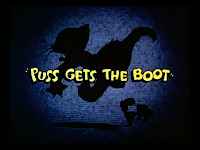 As with most characters, Tom and Jerry are not fully formed in thier first appearance. In "Puss Gets the Boot", Jerry is not as rounded and cute as he would become, but more striking is Tom's scruffy, furry appearance, as well as the fact that his name is not Tom yet, but rather Jasper. 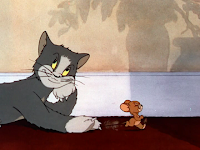 So, Tom...I mean, Jasper...is toying with Jerry until a vase is broken. Jasper's owner, Mammy Two-Shoes (who is only ever shown from the waist down, keeping the action from the perspective of the cat and mouse) quickly lets Jasper know that if he breaks one more thing in the house, he will be "O-W-T, Out!" 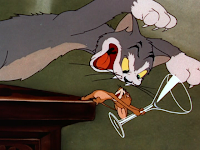 Jerry realizes that the best way to get rid of Jasper completely is to break something and blame it on the cat. Whenever Jasper gets too close to him, Jerry threatens to drop a glass to the floor. Some well-placed pillows by Jasper quickly ends the threat, until Jerry begins flinging plates down upon the cat, forcing Jasper to catch them and keep them from breaking. 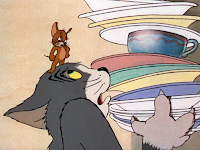 Soon, Jasper has a stack of plates, bottles and glasses piled ceiling-high in his arms. Some final taunting from Jerry, plus a swift kick in the rear, send the entire pile crashing to the floor. Mammy arrives swiftly and drags Jasper out of the house, much to the delight of Jerry. 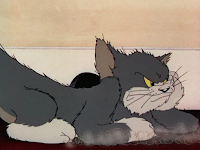 It is interesting to see how the pace of the Tom and Jerry films starts off rather slowly. Over the years, they would become much more energetic and wild. I think it's safe to say that the arrival of Tex Avery to MGM had something to do with it.
Posted by Coyote at 10:27 PM