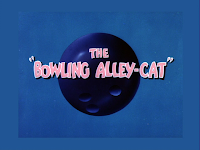 Sometimes, just the location of a Tom and Jerry film gives you an idea of the pain that will be involved for Tom. Such as it is with "Bowling Alley-Cat". 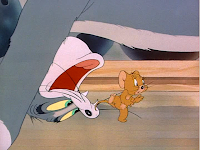 The slippery bowling lanes are the perfect skating rink for Jerry, but Tom is unable to stand up on the waxy surface, as he tries to catch Jerry. Jerry flings the cat into an ashtray and Tom is left with a mouthful of cigarette butts. 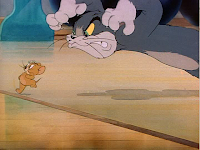 The sport shifts a bit when Tom pitches a bowling ball at Jerry, who uses a bowling pin for a baseball bat. In this situation, Tom does what anyone would do: try to catch the bowling ball. 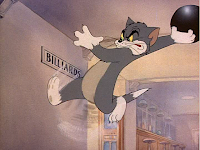 A train of bowling balls is sent after Jerry down the ball return, but Tom ends up with a mouthful of one, while the others smack his rear. The "ouch" scene for this film would be when Tom's head gets caught between two bowling balls. Clunk! 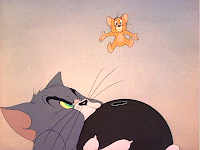 A recurring question to me is: Why does Tom never feel when Jerry is tying the cat's tail to something? Here, Jerry ties Tom's tail to a bowling ball, resulting in his being thrown down the alley, through a brick wall and into a trash can. Jerry tallies up his bowling score.
Posted by Coyote at 7:19 PM

This is probaly the first funny Tom & Jerry cartoon ever made. ;)
In my opinion, anyways.
(this is Sev,btw, and I changed my name. Just letting you know you have'nt got a stranger lurking.:)