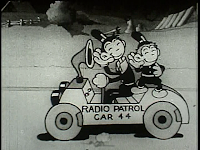 In "The Magic Mummy", Tom and Jerry are police officers sent on the trail of a mummy that was stolen from a museum. They track down a mysterious figure who goes underground at a graveyard. 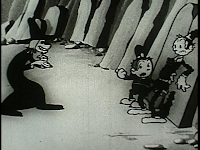 The mystery sorcerer brings the mummy back to life and forces it to sing for him. Our heros try to apprehend the villian but get thier skin literally ripped off thier bodies momentarily by the sorcerer's magic and are locked away in the wall. 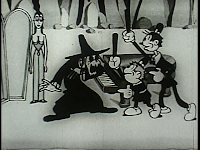 Tom and Jerry escape and try once more to stop the sorcerer, who is now making the mummy preform in front of a ghoulish skeleton audience. 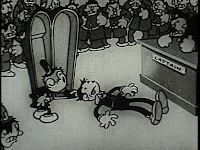 In the confusion, Jerry grabs the coffin, believing it contains the mummy, but when he returns to the police station, it is revealed that Tom is actually inside.
Posted by Coyote at 9:58 PM