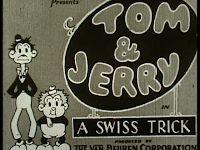 Tom and Jerry climb aboard a train in the Swiss Alps,, but when the train gets tired out from climbing a vertical slope, it's up to a rescue dog to save the day. The dog is surprisingly not a St. Bernard, but it does have the barrel of booze required to get the train up and running again. 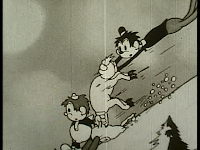 The train deserts our heros, who then have a run-in with a goat and a bear. While playing around with the echos in the mountains, Tom's head is knocked off momentarily by his own rebounding voice. 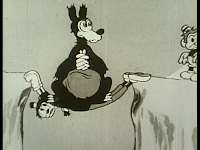 The duo is lured by a piece of swiss cheese into a tavern, where thier musical hijinks please the crowd. 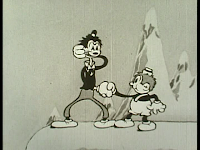 Tom and Jerry swipe a piece of swiss cheese and share it with each other. All seems well, until holes began to form all over thier bodies. Since the two now look like pieces of cheese themselves, they are chased off by a horde of mice from the tavern. Surrealism, without a doubt.
Posted by Coyote at 10:06 PM