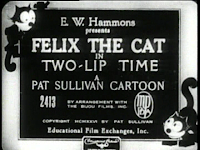 Today's installment of PD Warehouse features none other than Felix the Cat. In "Two Lip Time", Felix chases a mouse aboard a ship. He loses the mouse but gains a nice case of seasickness, resulting in some vomiting out of a porthole. 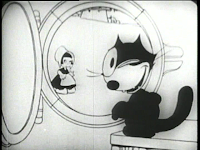 The ship docks and a dutch girl catches the eye of frisky Felix. He commences wooing her, which seems to be working (oddly enough, seeing as how he is a cat), until it is discovered that the girl has a jealous boyfriend. 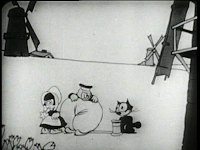 Felix dismisses the rival quickly by using a tire pump to inflate the pants of the boy, sending him sailing off with the wind. Felix's singing draws the attention of a man, who flings his clog at the cat, sending our hero out to sea. Of course, Felix conveniantly plucks the exclamation point from above his head to use as an oar for rowing the clog back to shore. 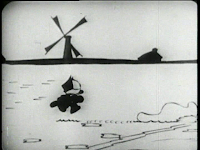 Hunger sets in and Felix tires to get some milk from one of the locals, who will only part with the milk if Felix waters his flowers for him. 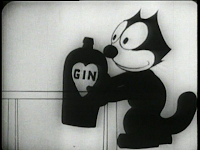 Felix accidentally dumps gin into the watering can, resulting in drunken flowers and trees. The dutchman gives chase to Felix, but he is also dismissed by the cat, who uses his tail as a crank on a windmill, blowing his adversary away.
Posted by Coyote at 10:16 PM