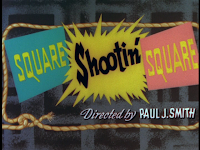 "Square Shootin' Square" is a lesson in how many ways a woodpecker can slip dynamite to a crook. 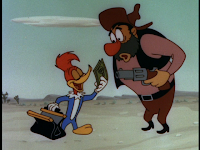 A bank robber hides his stolen loot in Woody's tree, but when Woody claims the dough for himself, the hijinks begin. 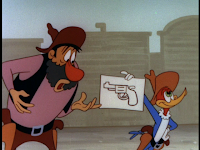 The thief tries to reclaim the money but Woody manages to insert TNT into his vacinity at every turn. Even in an old fashioned "drawing" contest, Woody's doodle of a gun manages to shoot the criminal in the face. 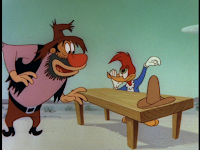 A "shell game" results in multiple explosions for the crook, and some fast word play gets the crook to insist on claiming a lit drum of dynamite. 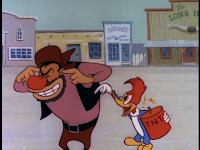 Finally, the robber's abused horse fights back by double-crossing its master. One more gunshot to the face causes the crook to break down and beg an officer to take him away to jail, seeing prison as his only escape from Woody.
Posted by Coyote at 9:03 PM