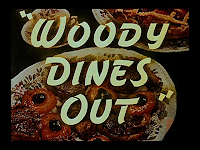 Woody is on the search for a meal but all of the local restaurants are closed. He finally finds a sign in a window that promises to "stuff" him. 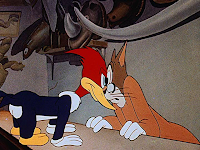 Unbeknownst to Woody, he has entered a taxidermy shop and the fox who owns it is determined to collect on a cash reward for a stuffed woodpecker. The film contains mant funny moments as Woody believes the establishment he entered is a diner rather than a taxidermists. 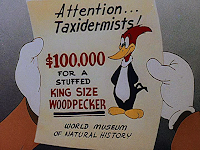 The fox dreams of what he could obtain with the money; "women, motorcars, women, yachts, women, mansion, women..." and he slips some knock-out pills into Woody's soup. Woody awakens on the taxidermy table but is not ready to be stuffed just yet. 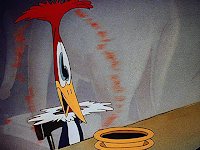 The fox learns that trying to kill Woody is no easy feat, since the woodpecker uses everything at his disposal to inflict pain upon the fox, such as an anvil and an elevator. 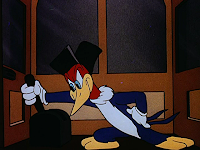 The fox's dreams of fortune are just as squashed as his body and Woody even manages to infiltrate his crushed dream.
Posted by Coyote at 8:08 PM

I blame the fact that I am in the middle of a 60 hour work week and haven't had a day off.

I must have still been thinking about the cartoon "Woody Woodpecker".

I will not edit the post so that everyone can see what being overtired can do to a person. :)