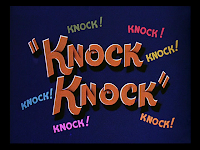 Woody Woodpecker first appeared in the Andy Panda cartoon, "Knock Knock". As Andy's father is busy studying his racing form, he is interrupted by a knocking sound. Assuming it is the door, he answers it to find noone there. His frustration causes him to rip the door apart, only to learn that the knocking is coming from the roof. 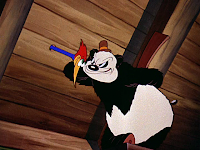 "Guess who?" It's Woody and he has been destroying the roof with his constant pecking. Andy and his father learn that the holes in the roof are the least of the problems. The cross-eyed woodpecker is clearly insane with a crazed laugh and an affection for nose-honking. In his first form, Woody is quite the colorful character, complete with green tail feathers, a red chest and blue feathers. He is very loud, both in appearance and personality. 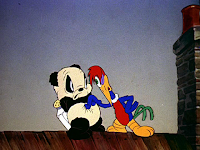 Poppa Panda has mishaps with his gun and must resort to more clever methods to rid himself of Woody. A time bomb disguised as a female bird is enough to trick the woodpecker into an explosive kiss, and Woody must cure his broken heart by terrorizing the pandas some more. 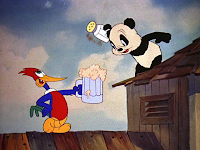 After several unsuccessful attempts to pour salt on Woody's tail, Andy finally does and renders Woody incapacitated. Two more woodpeckers in insane asylum gear come to collect Woody, but they prove to be just as looney. 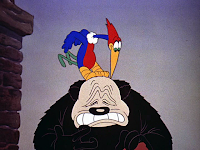 What was meant as a bit role in a cartoon turned into much more and now Woody Woodpecker was unleashed upon the world.
Posted by Coyote at 11:11 PM

I guess this story was based on the origin of Woody when a woodpecker was knocking on the room of Walter Lantz's honeymoon cabin.