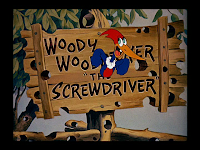 Yep, it's Woody Woodpecker...and for the next month, we're going screwy with Walter Lantz's biggest star.

Many cartoon characters evolve, in both physical appearance and in personality, but Woody always stands out to me in terms of character evolution. His appearance changes drastically over the years as does his personality, but that is to be expected when your career spans 32 years.

Alongside of Andy Panda, Chilly Willy, Wally Walrus, Buzz Buzzard, Gabby Gator and many others, Woody always stood out as the ultimate instigator and troublemaker. Join me on a journey through the career of the most popular Lantz character.
Posted by Coyote at 9:53 PM