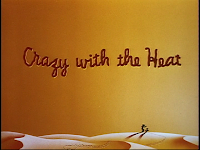 Mickey would be absent from a series of cartoons featuring only Donald and Goofy, showing that the two's personalities had eclipsed the mouse's. 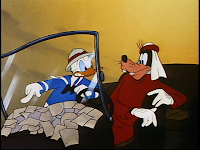 Donald and Goofy run out of gas while driving through the desert and are forced to go on foot. Goofy, of course, is oblivious to the danger while Donald is freaking out. In a very funny scene, Goofy uses a magnifying glass to look at thier map and sets the map on fire, at which point he uses the last of Donald's precious water to put out the fire. Donald's frustration with Goofy, who just doesn't seem to get it, makes these two a great comedy team. 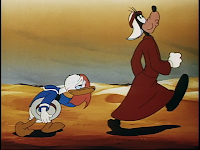 The rest of the film deals with mirages. While Donald sees ice mountains everywhere, Goofy envisions a soda fountain. Goofy's mirage is quite elaborate. He can not afford to pay for the imaginary beverages (which he was unable to actually drink in the first place) and is forced to wash imaginary dishes to work off his imaginary bill. 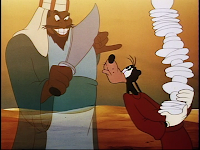 Donald and Goofy escape on a camel and we are left to wonder if the animal is just another mirage as well.
Posted by Coyote at 8:30 PM