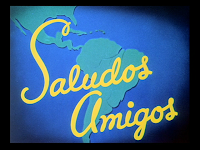 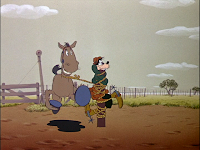 During World War II, the Latin American market became important to American industry and "Saludos Amigos" (and its follow-up "The Three Caballeros") where products of this time. The film took four short cartoons and blended them with live-action footage of the Disney artists visiting numerous South American locations. 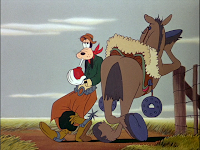 In Goofy's segment, "El Gaucho Goofy", we find our hero portraying the Argentina version of the cowboy, the gaucho. Goofy is far from a perfect gaucho and his horse has a mind of its own. 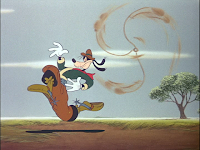 The cartoon has the ever-present narrator, who at one point, slows down the video and audio in order for us to fully appreciate the graceful(?) way that Goofy captures an ostrich. We are then treated to some singing from Goofy, which would be remarkable, if it weren't revealed that a skipping phonograph is actually providing his vocals. 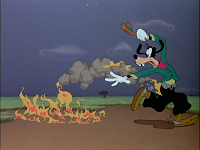 Goofy dances with his horse, who proves that Disney characters aren't above dressing in drag. If you go in search of this film on dvd, know that the scene of Goofy smoking has been edited on the gold collection release, as I mentioned once before here.
Posted by Coyote at 9:38 PM