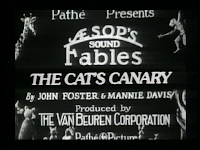 In Van Beuren's "The Cat's Canary", we begin with a grisly scene in which a cat sets a trap to catch birds, succeeds, and eats his prey. 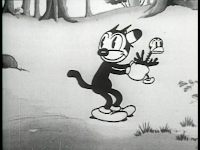 The trouble begins for the cat, however, when the only sounds that eminate from his mouth are the chirpings of the bird in his stomach. He quickly seeks out a doctor's assistance. 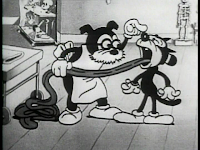 The doctor's treatment apparently involves banging the cat on the floor and smacking his rear, in an attempt to get the bird out. Eventually, the cat gets ejected from the office. 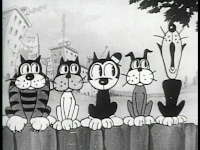 After dealing with lovesick birds, who are attracted to the chirping coming from the cat, he joins up with a group of alley cats, who eventually accept the chirping feline. Debris is thrown from a nearby building to silence the cat's tune, resulting in the cat getting hit with a birdcage, which allows the bird in his stomach to escape. 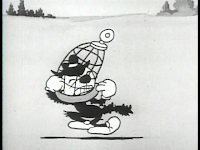 The trouble isn't over yet for the cat, as the bird quickly rounds up his buddies, who launch and aerial assault on the feline. The cat is pelted with eggs and even a cannonball launched from the bill of a pelican, delivering sweet revenge from the birds.
Posted by Coyote at 4:05 PM

Call me crazy, but I absolutely LOVE Van Beuren cartoons. I'm not sure why,though.

Me too, but then again, I just love black and white cartoons in general.