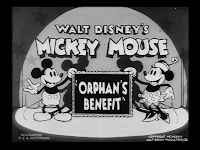 Goofy only appeared in one film in 1934, but in it we begin to see him take on some of his future characteristics. 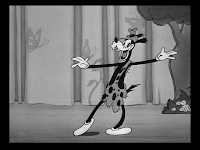 Mickey and the gang put on several performances for the young mice from the orphanage. Make no mistake, this film is more significant in the career of Donald Duck than Goofy, but the dog's bumbling is not without value here. 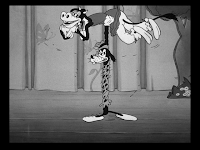 Goofy (still Dippy Dawg at this point in his career) and Horace Horsecollar twirl and throw Clarabelle Cow back and forth between each other, giving Goofy plenty of opportunities to get twisted up and clobbered. 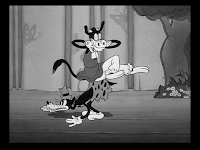 Eventually Clarabelle's dress is inadvertently ripped off by a clueless Goofy, earning him a knock on the head courtesy of the humiliated cow. 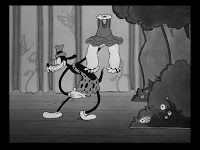 It would not be long before Dippy would be named Goofy and he would take his place within the comedy trio with Mickey and Donald. The upcoming films are classics, due mainly to the extremely different personalities of the three characters.
Posted by Coyote at 10:59 PM