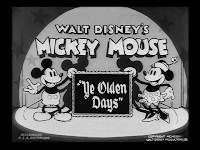 The newly named Dippy Dawg had several cameos after his debut. In a rather "out of character" appearance, Dippy is cast as a creepy villionous character in "Ye Olden Days". It's not a role that he plays well since it is too hard not to laugh at him rather than view him as a threat to Mickey. 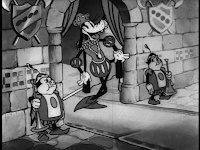 Minnie is the daughter of the king and she is scheduled to marry Dippy Dawg. When she refuses, she is locked in the castle tower. 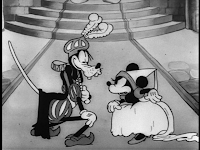 Along comes Mickey, a wandering minstrel, who sets out to rescue Minnie. His attempt is foiled but his life is spared when Minnie professes her love for him. 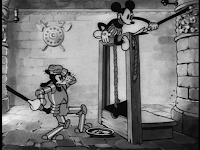 The king arranges a duel between Mickey and Dippy, with the winner earning Minnie's hand. Even the two steeds get in on the action as the plucky mouse dons a stove for armor and a bucket for a helmet. Mickey gets the upper hand when Dippy's spear is severed by the guillotine and the dog is forced to leap out of a window to escape. Mickey is victorious and Minnie shows her appreciation. 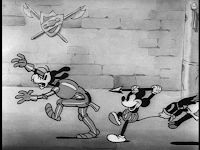 This cartoon was a nice break from the usual "singing and dancing" routine, but it is clear that Dippy Dawg still has a way to go before he becomes the loveable Goofy.
Posted by Coyote at 9:13 PM