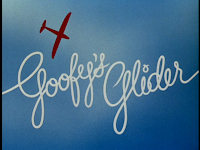 "Goofy's Glider" is the first in the very hilarious "How To" cartoons. It is a formula that would be used with the character throughout the 1940's. 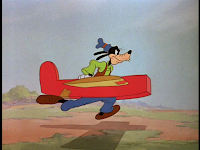 The film revolves around Goofy's attempts to get his glider into the air. What makes these films different however, is the presense of a narrator who takes on the role of Goofy's instructor. 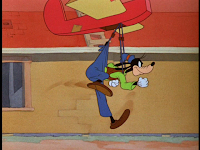 Many times the narrator seems lost in his own world, oblivious to Goofy's bumblings, but then is suddenly snapped back to reality during a moment of crisis. The droning, almost snooty tone of the narrator's voice is extremely funny when contrasted with Goofy's antics. 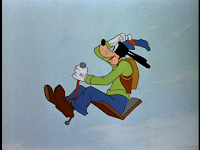 After trying a bike, catapult and roller skates to launch the glider, Goofy resorts to using a cannon, to which the narrator advises that if all else fails, "try your own ideas". Clearly the narrator has given up and, while Goofy tinkers with explosives, the professor-like voice is rambling on about nonsensical science facts. 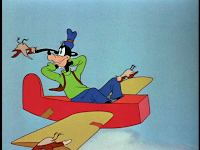 In my opinion, the Goofy films of the 1940's were the funniest ever made by Disney.
Posted by Coyote at 9:52 PM