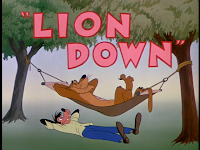 Lots of great Goofy cartoons this year, as our hero deals with fatherhood, gambling and his smoking addiction, but I had to pick "Lion Down" simply for its "cartooniness". 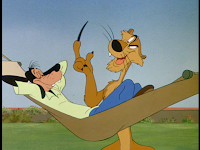 Goofy tries to set up a hammock on the roof of his building, but only has one tree to tie it to. He heads out to the woods and cuts down a second tree and brings it back home. His hammock is now set up and he relaxes in it. Problem solved? Nope! 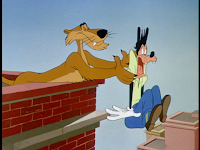 A mountain lion resides in the tree and does not take kindly to being removed from his woodland home. Furthermore, he finds Goofy's hammock appealing. 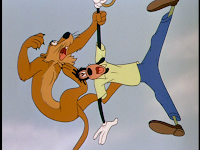 The film is packed with gags such as when Goofy steps out of the hammock while it is suspended across the buildings, he walks on the air for a moment until he realizes his predicament. He is then able to scramble on the air in order to get back to the safety of the hammock. 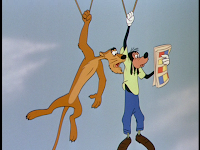 The doorbell that just won't stop ringing, and which brings the action to a grinding halt every time, is a great repeating joke, as is the brief moment of shared laughter by Goofy and the lion at the newspaper comics, before the action resumes.
Finally, the lion takes his tree back but leaves an acorn, which Goofy plants and waits for it to grow so he can use his hammock again. All in all, a fun cartoon.
Posted by Coyote at 8:08 PM

One of my favorite scenes is when Goofy digs a hole for the new tree.
The furniture from the lower apartment is thrown about while the neighbour shouts and Goofy simply waters the downstairs' room.