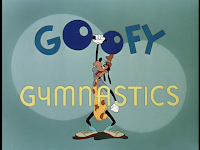 I think it's safe to say that Goofy takes the most physical abuse of his career during the course of this film, the majority of which takes place in the last minute. 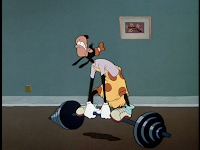 Goofy is now a typical working guy who comes home exhausted, but is inspired to take up a home work-out program. His mail-order home gym arrives at lightning speed and soon he is guided by the recorded voice of an instructor. 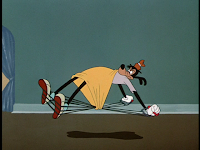 Goofy has nothing but trouble with the barbells and quickly gets tangled up in the chest expansion cables. 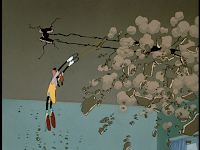 What results is Goofy's home being demolished as his punished body is flung around the room, through the ceiling and out the window. 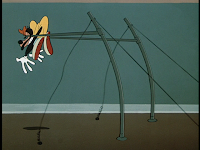 After quickly being admonished by a woman in a neighboring building who believes he is a "masher", Goofy is hurtled back directly through the brick wall of his building. His work-out clearly leaves him exhausted, but not in the way that it should have. 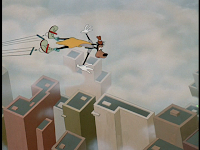 Clips from this cartoon were used in the movie "Who Framed Roger Rabbit". While the cartoon is a good example of Goofy at his best, it is odd for it to be used in "Roger Rabbit", since the events in the movie predate this cartoon. Now I'm being picky though. This is one of my favorite Goofy cartoons.
Posted by Coyote at 9:27 PM

It's noted on the WFRR DVD, Goofy Gymnastics was used because of a vote between the film's crew that it was Disney's wackiest cartoon of the times.
One of my personal favs!