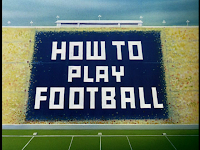 I admit that I'm not much of a sports fan. I usually turn a game on when I want to take a nap. I might feel differently if every game was like the ones played in Goofy cartoons. 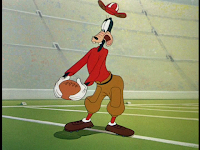 Goofy has come a long way from simply being a football announcer in "Touchdown Mickey" to be being the star of the game in this film. Once again, everyone in the film's universe resembles Goofy. 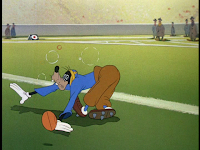 The usual mundane-voiced narrator is replaced here by a much more sports-commentator-esque voice, which just isn't as funny to me, but I guess it is more appropriate for the pace of the film. 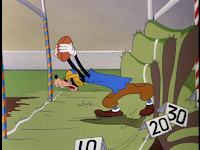 The "Goofys" of the two teams fumble thier way through the game (no pun intended),the coach is driven mad and confined to a straight jacket. 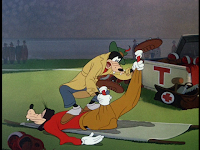 It is disturbing, yet all too true I fear, to see that the ridiculous act of players slapping each other's asses is demonstrated here as well.
Posted by Coyote at 10:05 PM