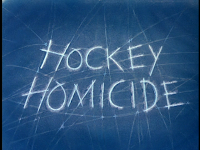 Usually, if you want to see a zany cartoon you would look to Warner Bros. since nobody did it better. However, once in a while a cartoon comes from another studio that can be ranked right along side the Looney Tunes gang in terms of hilarious insanity. Such is the case with Goofy's "Hockey Homicide". 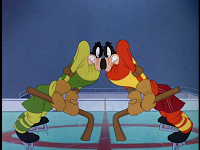 This is another film that really needs to be seen in order to be fully appreciated. The action is fast-paced, energetic and full of gags. The speed builds and builds until there is no choice but to throw the typical rules of a Disney cartoon right out the window. 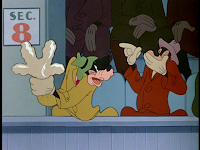 Even the fans are laugh-inducing as one of them actually forgets for a moment which team he was originally cheering for. Probably due to all of the blows to the head from the character next to him. 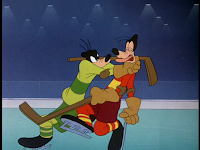 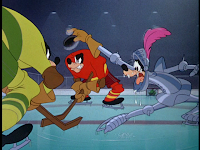 The referree takes so much abuse that he resorts to wearing full body armor, while a spectator is left chewing on a puck after his burger has been flung onto the field. By the last minute of the film, the announcer's words are a jumble, being spit out at break-neck pace, while the game disintegrates into chaos. 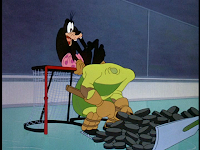 The action is so frantic that several clips from other Disney films are quickly spliced into the action. If you don't blink, you will see a few seconds of "How to Play Baseball", "How to Play Football", "Victory Through Air Power", and Monstro the Whale from "Pinocchio".
Posted by Coyote at 6:50 PM