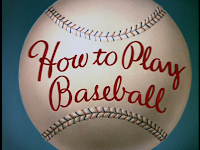 Goofy tackled a wide variety of sports during his career, and baseball seems an obvious choice. The pace of this film increases towards the end and the style proves that Disney cartoons can actually make you laugh. 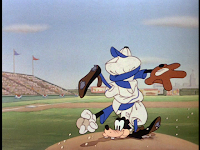 Another aspect of the Goofy cartoons around this time is the use of multiple characters that all resemble Goofy. Some people have asked me why this is and I always have felt that it was the artist's way of portraying Goofy as the "every man". Goofy could take on many roles, even within one film. 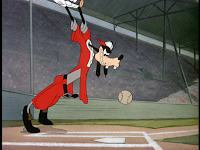 Once the basics of the sport are (somewhat) explained by the narrator and demonstrated by Goofy in his own fumbling way, it is time for the World Series. 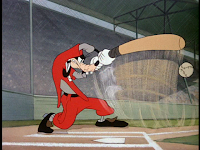 The narrator is much more enthusiastic here as he calls the game, trying to keep pace with the frantic actions of Goofy. One of the funniest moments for me is when Goofy knocks the ball apart, reducing it to a ball of string for the outfielder to catch. Outfielder Goofy then tries to furiously reroll the string into some version of a ball. However, when that fails, he must simply grab the entire pile of string and hop with it to home plate, when the controversial ruling of the umpire is given. 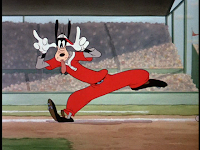 Once again, it was hard to choose a film from this year, but I had to go with the one that made me laugh out loud.
Posted by Coyote at 8:43 PM