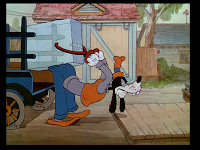 By 1936, Goofy begins to leave his Dippy Dawg appearance behind. In "Moving Day", he is an ice delivery man who gets wrapped up in Mickey and Donald's scheme. 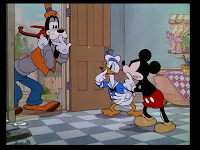 The mouse and duck are late paying thier rent and Sheriff Pete is laying down the law by planning to sell thier furniture. Goofy arrives just in time to help assist the tenents with packing up thier belongings before Pete can sell them. 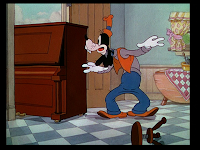 While Donald deals with getting his rear end stuck in plungers and fish bowls, Goofy does battle with a piano that has a mind of its own. Goofy is placed in a battle of wits with the not-so-inanimate object that just refuses to stay aboard the truck. 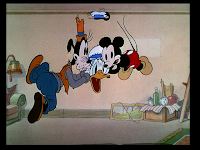 A leaking gas pipe causes Donald more trouble and when Pete lights his cigar, the house explodes, allowing for a getaway from the delinquent renters. 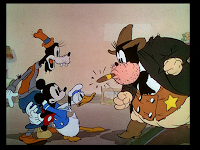 Goofy's performance with the piano shows the character's ability to use pantomine effectively. Goofy accomplishes more without a single word than others do with full dialogue.
Posted by Coyote at 10:15 PM

I sure hope 'Whalers' is highlighted on this blog. That's my personal fav M/D/G cartoon.

I hadn't planned on using it this time around. I had another cartoon in mind from 1938 to represent Goofy. I'll see what I can do for you though. :)