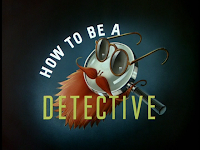 In a crime-ridden city, Goofy is an unlikely detective hired by a woman to find the mysterious "Al". 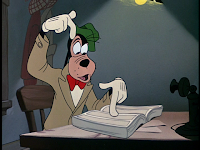 The chief of police (who looks just like Pete, although this cartoon is not listed in Pete's filmography most of the time) seems quite adamant that Goofy leave this case alone. Everyone seems to be trying to stop Goofy from finding Al, including some shifty weasels. 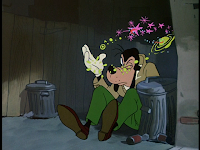 Goofy quickly finds himself sunk to the bottom of the river with cement on his feet and even ends up in the morgue, where he is promptly kicked out and told not to come back "until he's ready". 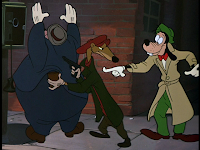 The film shifts into high gear for an energetic car chase sequence full of gags. The mystery of Al is finally revealed. 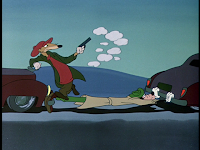 It seems that the police chief is Al and the woman who was looking for him is his bride-to-be. Apparently, the cop was having second thoughts about the marriage and was trying to hide. If only Goofy hadn't been on the case.
Posted by Coyote at 10:00 PM