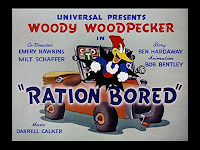 A product of it's time, "Ration Bored" deals with wartime gas rationing. Woody is at his peak here in the area of anti-authoritarianism. 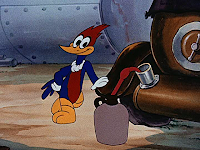 Woody runs out of gas during a frivolous drive. He presents a children's book at the gas station, but it is clearly not the "A,B,C ration book" that the attendant had in mind. 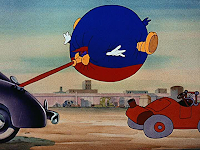 Woody resorts to stealing gas by siphoning it from the gas tanks of other cars and eventually attempts his theft on a police car. Woody proves that the law does not apply to him as he assaults the cop after some back-and-forth with the siphon hose. 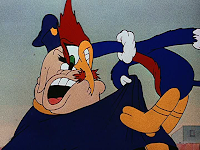 During the chase, the cop ends up with tires on his appendages and Woody slaps a steering wheel on him, driving the officer like a car directly into a gas silo...which explodes...killing them both. 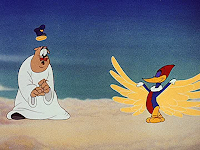 Once in heaven, they learn that angel wings are also being rationed, and the cop learns that even in the afterlife, there is no escape from the woodpecker.
Posted by Coyote at 8:50 PM

This is an important film, because this is the first short with Woody wearing white gloves. Already, we are seeing evolution.

Also, his beak has shortened and his tail feathers have switched from green to blue.

By the way, could you upload a pic of Woody's expression when he says "I'm a necessary evil"? I don't know how to upload pics and I wanted to use the pic.