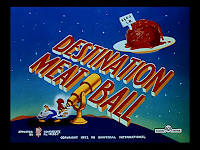 Woody took some time off in 1950 but returned in 1951 with some cartoons in which he doesn't speak. My guess is that this was a way for the studio to save money. Anyway, in "Destination Meatball", Woody encounters dishonest grocery store owner, Buzz Buzzard, who literally jacks up his prices. 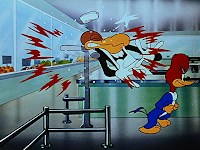 Buzz uses invisible ink to hide the "hidden tax", but Woody refuses to pay except for a stamp to the buzzard's hand. 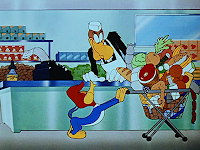 The invisible ink is dropped on some parts of Woody and Buzz believes he has killed the woodpecker. Afraid of the hangman's noose, he sweeps Woody's remains into the basement. "The Woody Woodpecker Polka" (from a cartoon released the same year) is whistled by both Woody and, oddly enough, Buzz in this film. 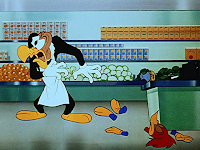 Woody tries to use a phony ghost to scare Buzz but when the jig is up, both parties douse themselves in the ink. Having invisible characters was another cost-cutting device, I am sure. 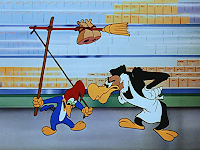 Buzz is led by Woody into the freezer where he is solidified and put on display in the store window, and Woody makes off with his free groceries.
Posted by Coyote at 5:33 PM

I think he did'nt talk much because Grace Stafford was still trying to get Woody's voice right. In some cartoons where he does speak, he sounds a little strange. Especially Woodpecker in the Rough.