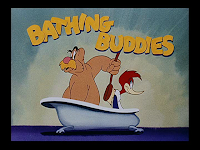 Wally Walrus has rented out a room in his home to a new tenant. Unfortunately for him, the tenant is Woody Woodpecker. 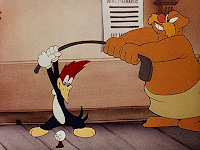 The trouble begins with Woody's noisy and destructive game of indoor golf. Wally informs him of the strict rules, which are specific enough to include "no opium smoking". 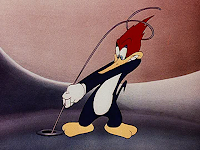 Woody decides to take a bath but drops a dime down the drain accidentally. Determined to retrieve it, the woodpecker begins his assault on the pipes in his bathroom. 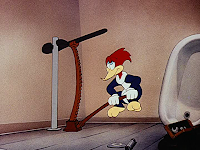 Unbeknownst to him, each action that Woody preforms on the pipes directly affects Wally's bathtub downstairs. Soon the walrus has a wire in his face (and...erm...elsewhere), and his tub is being jostled, shaken, lifted and dropped. 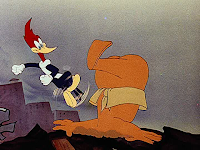 Woody drops dynamite down the pipes and the house explodes...but at least he finally retrieves his dime, much to Wally's chagrin.
Posted by Coyote at 10:09 PM