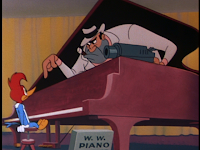 If there ever was a piece of music that is synonomous with cartoons, it is "Hungarian Rhapsody #2". Woody Woodpecker is just one of many characters that have played it on the piano, such as he does in "Convict Concerto". 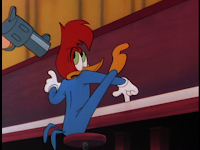 Woody is a piano tuner that is accosted by a bank robber on the run. The crook hides in Woody's piano and forces him at gunpoint to play without stopping. 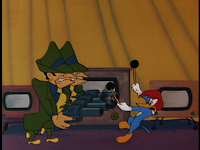 Woody tries to get the attention of a police officer, who is oblivious to what is going on around him, while the crook calls for his henchmen from inside the piano. 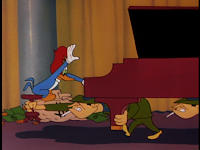 Playing "Hungarian Rhapsody #2", Woody, his piano and the thief inside are escorted out of the shop, right past the clueless cop, and onto an escape vehicle. 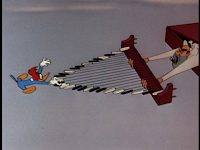 A fast-paced chase ensues. Woody frantically keeps playing the piano, even as it tossed out of the truck, onto a train, and is literally pulled apart as it flies out over a cliff. When Woody, piano and criminal all crash down to the ground, they land in jail, where Woody's frazzled nerves finally become unwound.
Definetely one of my favorite Woody Woodpecker films.
Posted by Coyote at 9:18 PM

This is one of my favorites as well. Hope it makes it on Vol. 2! Just out of curiousity, what is your #1 favorite Woody film? My choice is Barber of Seville, easily.

Hmmm...tough call. It would have to be one of the earlier cartoons. Probably "Woody Woodpecker".