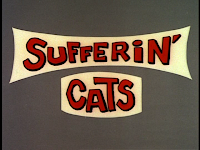 Woody Woodpecker is destroying the roof of a house, and the homeowner hires The Blue Streak, the world's fastest cat, to stop him. 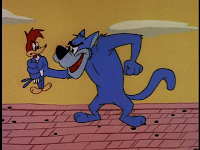 Woody's disbelief in the cat's claim is quickly squashed when the Blue Streak proves his speed by playing a one-man game of badminton, with Woody as the "birdie". 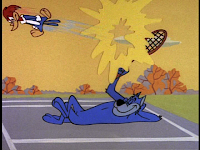 Woody slips the cat some tranquilizers in order to slow down the high-speed feline. The cat is reduced to less than a snail's pace, leaving Woody the opportunity to resume pecking holes in the roof. 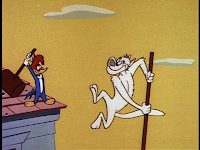 The Blue Streak discovers that he can reverse the effects of the pills if he receives a blow to the head. Woody whacks the cat with a mallet, inadvertantly restoring the cat's super-speed. 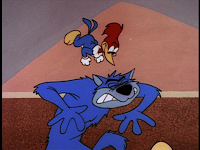 Once the cat catches Woody and goes to claim his reward, the woodpecker turns the tables once more, and the only reward the cat gets are some pecks to the head, compliments of Woody.
Posted by Coyote at 9:39 PM