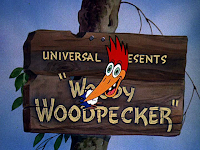 Woody got a cartoon series of his own beginning in 1941 with the obvious film name of "Woody Woodpecker". A staple of the cartoons was to have Woody burst forth from the title card to deliver his trademark laugh. 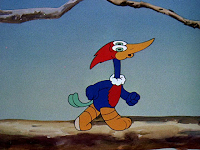 Woody leaps out and directly into a song ("Knock on Wood") in which he delights in his craziness. Many a time I have caught myself quietly singing this to myself. The other woodland animals label him as insane and urge him to seek professional help. 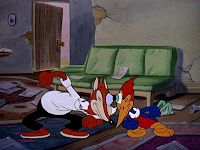 Woody goes to a doctor, who in this case is played by a fox (who's office is only open for one minute a day). The doctor should have taken the whole day off if Woody is his patient. 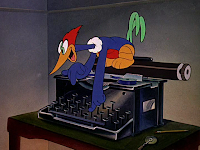 Woody frustrates the doctor by trying to read the eye chart with his eyes closed and by vanishing, only to reappear at the door seconds later. This is just the beginning. Soon, Woody is careening around the office in a flurry of nuttiness, eventually being thrown right out of the movie screen and into the audience. 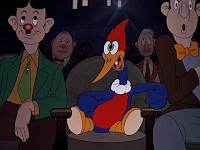 While the doctor on screen goes insane from his time with Woody, the woodpecker annoys the audience members until they slam his theater seat on him.
Posted by Coyote at 9:18 PM