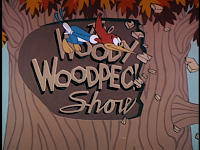 In a Halloween episode of the Woody Woodpecker Show, Walter Lantz tries to get Woody to blow up balloons for the party, but our hero has nothing but trouble. Lantz sends Woody off in a ghost costume and we transition into the new cartoon "Spook-a-Nanny". 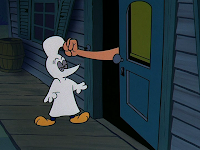 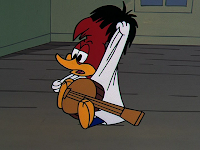 Woody meets up with some real ghosts (who just so happen to enjoy playing the woodpecker's theme song) and the spooks crash the party. 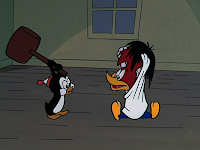 When the time comes for the cartoon's title song to be played, Woody takes to the piano for a tune that will stick in your head (even if you don't want it to). 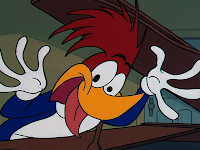 The Woody Woodpecker Show combined the classic cartoons with live segments with Walter Lantz, in which he would give drawing advice or tell the history behind his films and characters.
Posted by Coyote at 8:04 PM

Am I only one who thinks Andy panda was hideous looking in that cartoon? :/

No, you are not the only one.
Hearing Elroy Jetson's voice come from Andy only adds to the creepiness.