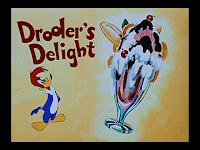 Woody Woodpecker took it easy in 1949 and only appeared in one film, "Drooler's Delight". On a hot day, nothing sounds better than an ice cream soda, so Woody takes his quarter and heads to the ice cream parlour. 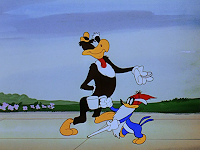 In route, he crosses paths with Buzz Buzzard, who steals Woody's quarter while the woodpecker is casually flipping it in the air. Woody pulls out all the stops to get his money back from Buzz. First, he impersonates a blind begger to snatch the quarter back. 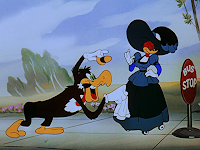 When Buzz re-obtains the quarter, Woody resorts to dressing in drag to catch the eye of the buzzard. Woody's female outfit is complete with... 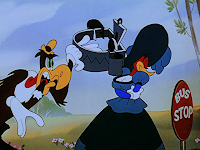 ...a booby trap! Woody finally makes it to the shop only to find Buzz is the waiter. 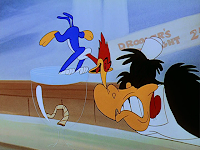 Woody shrinks in size during the final scene and is mixed up with ice cream in a glass by Buzz. Woody finally gets his Drooler's Delight and Buzz gets some pecks on his beak.
Posted by Coyote at 6:51 PM