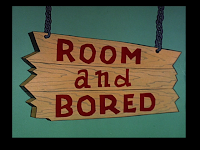 Chilly Willy's canine adversary, Smedley, appeared in a few cartoons with Woody, but I think it's safe to say that the combination was never as effective as when the dog and the penguin were paired together. 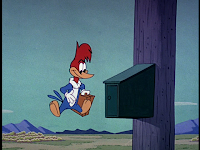 Woody takes up residence in a telephone pole and it's up to troubleshooter Smedley to evict him. 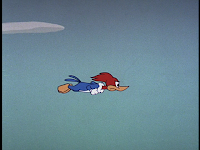 Woody dupes Smedley into delivering room service to him. Throughout the film, Smedley breaks the fourth wall and addresses the audience in his southern drawl. It's one of the traits of the dog that makes him funny, but it really doesn't do much this time. 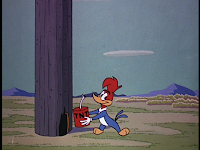 Eventually Smedley is trapped in the telephone lines and Woody uses the electricity flowing through the dog to light his home within the pole. 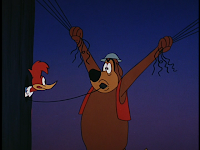 As I said when I began, I am missing cartoons of Woody's for the remainder of the 60's but I am sure I can do some padding from here on in. Stay tooned!
Posted by Coyote at 9:26 PM