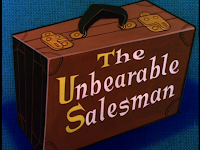 Woody tells his neice and nephew, Splinter and Knothead, how he aquired his bearskin rug. 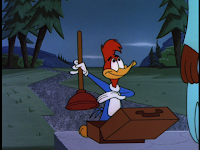 Woody is a door-to-door salesman, who pushs ordinary gadgets while trying to make them sound much more important than they really are. His next customer is a bear who is trying to hibernate for the winter. 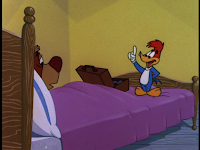 The bear cannot get rid of the pesky woodpecker and quickly resorts to violence to free himself from Woody. Woody gives the bear a "Do Not Disturb" sign, but when the bear goes outside to hang it on his door, Woody locks him out. When the bear bangs on the door to be let back in, Woody admonishes him for breaking the instructions of the sign. 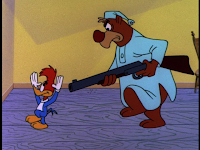 The bear locks Woody in a safe and dumps him in the river, but of course that never works in cartoons. By plane and by train, the bear fails to kill Woody. Eventually, one of his own death traps backfires on him. 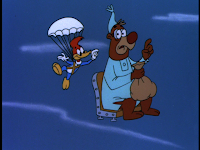 The bearskin rug on Woody's floor is very much alive, but at least it can finally get some rest.
Posted by Coyote at 9:54 PM