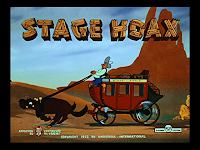 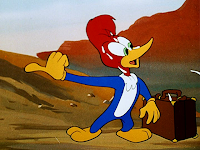 Woody is stranded in the desert in the old west and tries to hitch a ride. When he fails, he resorts to dressing in drag (complete with fake plastic female legs) to entice Wally Walrus to give him a lift in his stagecoach. 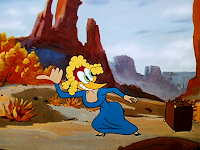 The wooing doesn't last long and Woody is ejected from the coach. He uses a "wanted" poster for Buzz Buzzard to trick Wally with a false stick-up. Once inside the coach, Woody is attacked by the real Buzz who shoots a rocket full of termites, which detach the coach from the horses. 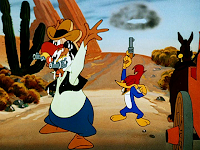 Woody hurls the fake female legs at Buzz before his coach goes over a cliff. Once more, he dons the dress and wig to trick Buzz into breaking his fall. Unrealistic amounts of legs protruding from beneath Woody's dress aren't enough to stop the buzzard from falling in lust and forcing himself upon the woodpecker. 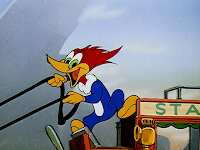 Woody's cries for help are answered by Wally Walrus (who has been carrying the fake cut-out of Buzz on his back this whole time). During the scuffle, Buzz ends up in drag accidentally, Wally falls in lust with him, and Woody uses them both, instead of horses, to pull his coach.
Confused yet?
Posted by Coyote at 11:02 PM