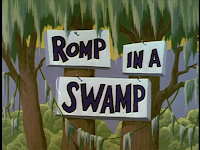 A new adversary for Woody was created in the form of Ali Gator (who would later be renamed Gabby Gator). The aligator fancies a woodpecker dinner but of course, the tables are turned every step of the way. 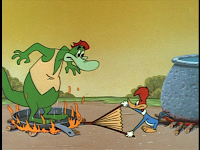 It's rather easy for Woody to dupe the gator into a pain-filled round of "follow the leader", which results in Ali being dropped from a cliff and bashed on the head with a mallet. 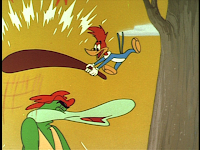 In a bizarre turn of events, Ali is frequently threatened by another aligator, which tries to eat him. At one point, Ali actually does eat Woody, but the woodpecker uses the opportunity to polish the gator's eyeballs (and happens to break one of them in the process). 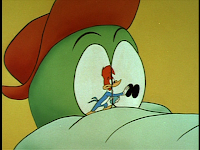 Ali ends up in his own pressure cooker instead of Woody and is blasted up into outer space. 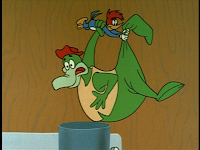 Note: Early in the film, Ali reads from a tag around Woody's neck, "In case of accident, notify Walter Lantz".
Posted by Coyote at 9:22 PM