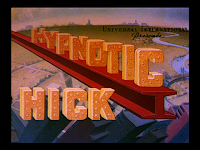 3-D films were all the craze in 1953, and Woody Woodpecker contributed with "Hypnotic Hick". Throughout the cartoon, the 3-D effect is utilized with the characters leaping,swinging (and spitting bolts) toward the screen. 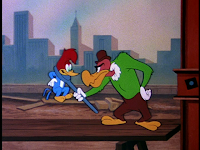 Woody is hired to deliver a summons to Buzz Buzzard, who works at a construction site. (Always a good location for a cartoon.) 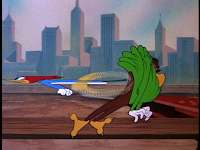 After trying every trick in the book, yet failing, Woody resorts to hypnotism to force Buzz to accept the summons. 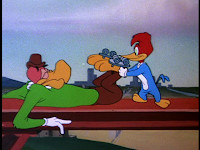 Woody is not satisfied with simply completing his objective, but rather sets out to completely humiliate Buzz. Using his hypnotic powers, he forces Buzz to act like various animals, then forces him to be his protector. Woody places himself in danger around the construction site and the hypnotized buzzard has no choice but to place himself in harm's way to protect his master. 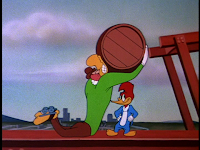 Woody brings Buzz to justice but the woodpecker is given a summons of his own...for hypnotizing out of season.
Posted by Coyote at 6:48 PM