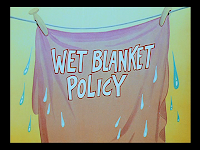 "Wet Blanket Policy" places Woody against the evil Buzz Buzzard, a shifty insurance salesman. The cartoon also is the first to feature the "Woody Woodpecker Song", which I never really cared for since the lyrics include gruesome images of the woodpecker "knocking holes in your head"...but I digress. 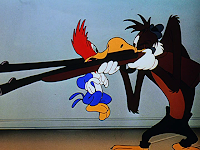 Anyway, Buzz forces Woody to sign a life insurance policy that states the buzzard would be the beneficiary, should Woody meet an untimely death. 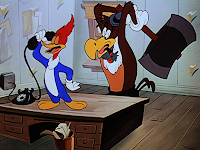 Before the ink is even dry, Buzz begins his attempts to kill Woody. A gun and and axe don't work, especially when Woody pauses the chase to answer the phone (and uses the delay to douse Buzz in ink). 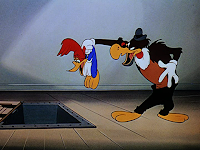 Buzz attempts to drop Woody into a tank of crocodiles, which he just happens to have beneath his office, but of course Woody gets the drop on Buzz. 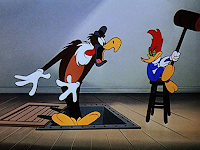 The buzzard is sent fleeing from the crocs as Woody pecks the insurance policy to confetti.
Posted by Coyote at 10:13 PM

It will be a very difficult decision. :)