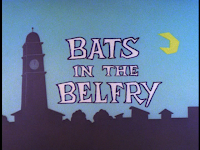 A doctor has just diagnosed a colonel with a bizarre illness. It seems the colonel is allergic to noise and is sent into a jittery fit whenever noise is present. 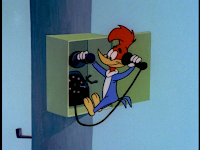 The butler has the task of keeping everything quiet for the colonel, which wouldn't be too hard if it were not for Woody Woodpecker. 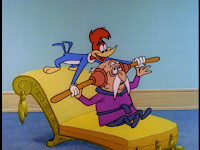 After his tree-pecking is silenced by the butler, Woody sets out for revenge. A telephone call delivers some long-distance pecking from Woody and a nearby bell tower is a prime location to make some noise. 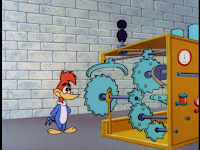 Woody continuously moves the hands on the clock forward so that the bell will chime, while the butler places himself at risk for many beatings as he tries to stop the bell from ringing. 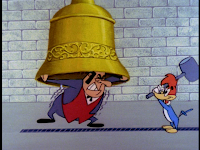 By the end of the film, the colonel seems to be recovering (momentarily), but the butler and the doctor (and even Woody) are now afflicted with the same allergy as the colonel. Even the "The End" card nervously shakes just like the characters.
Posted by Coyote at 7:52 PM

I wonder why Duck Dodgers calls this the worst cartoon of all-time? Does'nt look that bad to me.

Hmm...there are far worse cartoons than this. I can think of many.

As I was watching the 1960 Woody cartoons tonight, trying to pick one for this post, the other films from this year were worse in my opinion. This one was the only one that actually got a laugh out of me, so therefore I deemed it the winner.