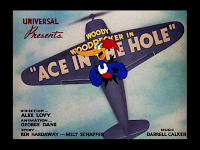 Like many other cartoon characters, Woody did his part for the army in "Ace in the Hole". His job seems a bit more trivial since it involves clipping horses, and Woody would rather be flying one of the planes. 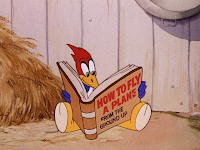 Woody does not conform to the laws of reality as he hitches a ride on top of the plane's shadow, and bounces dangerously over a group of bombs. 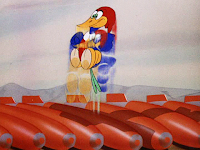 The Sarge squashes Woody's hopes of flying but that does not stop the woodpecker from trying on one of the pilot's suits. A flare is dropped inside and causes fireworks for our hero. 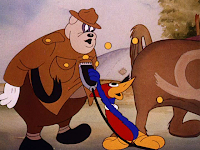 Woody finally ends up in a plane and the Sarge is put through the wringer as he tries to stop the bird. There is quite a "Tex Avery moment" here as the Sarge flees from the runaway plane and slams the hangar doors. There is a moment of silence, then the Sarge opens the door slowly....only to be mowed down by Woody's plane. 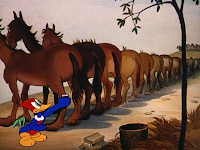 The Sarge is left crippled after being blown up by the bombs from Woody's plane, but that doesn't stop him from forcing Woody back into his horse-clipping duties at gunpoint.
Posted by Coyote at 7:15 PM