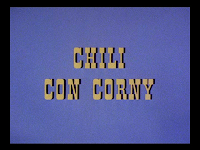 We reach the end of Woody's journey in 1972. In "Chili Con Corny", Woody is travelling through a barren wasteland in his car and comes upon Ms. Meanie's Cafe. 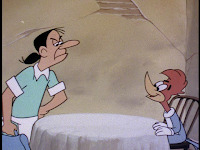 The only item on the menu is the chili, which scalds Woody's mouth, sending him fleeing outside in search of water. 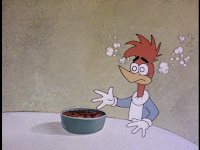 Ms. Meanie accuses Woody of trying to leave without paying the bill and forces him at gunpoint to wash dishes for her to work off his debt. 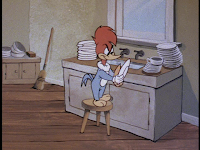 Woody doesn't come out on top here, for as often as he nearly escapes, the end result is the woodpecker washing dishes with Meanie's gun at his back. 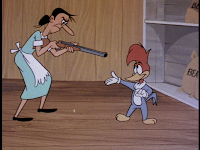 Not much more to say here. Obviously the quality of Woody's films had greatly decreased by this point (argueably before this point), and it was time for our hero to join the group of great cartoon characters from the golden age of animation in retirement.
Posted by Coyote at 7:25 PM

Since your Woody tribut is over, who's next now? At least give us a hint.

Its a odd idea, but sounds fun!